Brawn was an Autobot Mini Vehicle released in 1984, in the first wave of Generation 1. Brawn transforms into a generic off-road vehicle resembling a Land Rover Ninety (known later as the Land Rover Defender), with a Jeep-inspired chrome grill, and sporting a spare wheel on the roof.

His mold was originally THOUGHT to part of Takara’s 1983 Microman: Microchangeline as MC04 Mini CAR Robo 05: Jeep. However, recent discoveries published by YouTube’s Chris McFeely, indicate that Brawn was likely designed for Knickerbocker Toys’s Mysterians: Mobile Force as a toy called Jeepar, before Knickerbocker went out of business and presumably sold the designs to Hasbro or Takara, while selling some other non-vehicle Mysterians designs to Marchon. Brawn was eventually patented by Hideaki Yoke. The US Patent, titled Reconfigurable toy vehicle, was filed on October 4, 1985 (U.S. Patent No. USD297035 S).

Brawn is molded primarily in two colors, (using black only for the wheels), and uses no die-cast metal. He shares his deeply treaded plastic wheels with wave-mates Huffer and Gears. Like all the former Microchange Mini CAR “big vehicles,” he also shares a similar, very simple, transformation scheme. His chrome arms pull out from the sides, where they are hidden behind rotating door panels, and his legs swing down from the rear of the vehicle. The black hood still bears a molded, stylized "M", once thought a reference to the Microchange logo, but more likely the Mysterians logo, as it matches the M logo on Marchon’s eventual release of the geometrically-shaped Mysterians. Also like his brethren, his face is molded and painted flush with the bottom of the vehicle. Brawn’s low price point meant he included no accessories and only a sparse couple of stickers. Paint detail is limited to his face.
Date stamp location: back of vehicle
Rubsign location: None (1984), or left side door (1985) 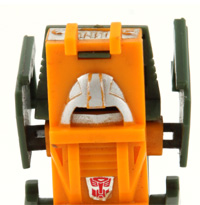 Brawn’s chrome arms are frequently broken and missing. they are a weak point in the design, and can be easily snapped off from the shoulder pins if they are pulled in the wrong direction. Furthermore, his arms may appear to be whole to the casual observer even when the chrome ares are missing due to the arm-like shape of his doors in robot mode.

Brawn was available in US and UK the first wave of 1984. Brawn was available again in 1985, sometimes packaged with a Mini-Spy. This version was also released in continental Europe, and in Japan’s G1 - Fight! Super Robot Lifeform Transformers as Gong. Brawn was produced and sold by licensee El Greco in Greece as Εγκέφαλος (Egkéfalos [Brain... obviously misinterpreting his English name]), listed as Type 1GR above. Brawn has not received a mainstream reissue release, outside of a 2003 keychain produced by licensee Fun 4 All. This newly-molded version eschews the rubsign, and has a molded loop on the front bumper that allows the included metal key chain to be clasped on. This is likely because the original tooling was permanently modified to create his successor, Outback.
Case Assortments (Item#/Asst#): 1984: Mini-Vehicles Asst. 1 (E5705/5700), 4 per 24; 1985: Mini-Vehicles with Mini-Spy (E5705/5709), 4 per 24; Mini-Vehicles Asst. 2 (E5705/5710), 1 per 24
MSRP: $2.99
Packaging: Blister card with instructions and Tech Spec on back, displayed in vehicle mode (1984), or robot mode (1985)
Robot Points: 1/2 Autobot
Paperwork included:none

Brawn was recolored in Brazil by Estrela to produce the evil character Jipe, and retooled in 1986 to produce Outback.

FUNCTION: DEMOLITIONS
“Might over microchips.”
To BRAWN, Earth is essentially a hostile environment—and he loves it. Strong, rugged, agile—the most macho of all Autobots. Delights in challenges. Sorry for those not as tough as himself. Second strongest Autobot—can lift 190,000 pounds and knock down a small building with one punch. High resistance to artillery fire. Vulnerable to attack by electromagnetic waves.

Price Check
Find out what this item is worth with our real-time price guide!
Youtube
Ben shows you how to transform Brawn

Complete: In Stock - Buy It
Fig Only: Sold Out

This set includes no accessories.